Anyone could become Olympic champion in the men’s U100kg division. The field had so many favourites that each of the participants could knock out the elite. The elite has a short expiry date. The World medallists of Astana last year had no guarantee for a medal. In the field two former Olympic champions, and they were knocked out in the first round. Four World champions and Lukas Krpalek came on top today.

The Czech superman won the world title in 2014 but hadn’t won any gold medal outside his country. Meanwhile he married, became fifth at the World Championships and at this year’s European Championships he even finished ninth. But at 11 August, all pieces were on his plate in the right order.

The first piece of the puzzle was not so easy to close, Portuguese Jorge Fonseca led in his match with Krpalek by yuko until the last minute but Krpalek scored waza-ari and proceeded. Also 2009 World Champion Maxim Rakov was defeated needing the full five minutes and in the third round Ryunosuke Haga, the 2015 World Champion was defeated. Lukas didn’t get it for free today. The tall Czech, likely the tallest in the field had to battle with current world number one Cyrille Maret, a match with history. In Paris last year Maret defeated Krpalek and the results required a revenge. Today all revenge matches of his life were compensated, it was all worth it.

Meanwhile Elmar Gasimov of Azerbaijan qualified for the final via victories over former World and Olympic champion Tagir Khaibulaev, Lyes Bouyacoub and Ramadan Darwish and in the semi final Artem Bloshenko was the unexpected joker from the Ukraine. Bloshenko overcame Cho Guham (KOR) and vice world champion Karl Richard Frey. Compared to Krpalek, Gasimov had a ticket to the final, but Gasimov defeated Krpalek three times in five matches. In their sixth confrontation Krpalek took the initiative and finished the match by ippon in the last minute. After almost 25 minutes fighting against the best athletes in the world of the amazing Olympic day, Lukas Krpalek was crowned Olympic champion. The Champion said: “Many people told me, 'Lukas, you will be champion, you will be champion'. That was very hard. A lot of people in Czech Republic had huge expectations. I am the number one in the Czech Republic and I am a legend in judo at home. "In the first round and in the second round I did not feel so good. Every match was so hard, but the first and the second match were even harder, because I fought with small guys and I don't like that. I am very proud that I could win the first Olympic medal for Czech Judo, the gold medal. It is amazing."

Krpalek was overwhelmed with emotions after his friend Alexandr Jurecka died at a diving accident in September 2015, Krpalek carried his photo on the podium to remind Jurecka. Krpalek spoke about his touching tribute to his friend and teammate Alexandr Jurecka: "In the last two matches I thought so strongly about my friend. I can't lose the match. I was thinking about him the whole day and especially in the last two matches. I had his picture with me all the time."

Cyrille Maret won the bronze against Karl Richard Frey, it wasn’t the best day for Germany and for Frey. The French were more successful with two medals. Japan disappointed with one bronze medal for world champion Ryunosuke Haga who came back in the repechage with two victories over Beka Gviniashvili, he was good, but not good enough. After the Georgian warrior Haga caught Artem Bloshenko for the bronze medal, but it wasn’t the colour he came for. That gold medal was for the Czech Republic, their first ever medal in judo. Krpalek is legend forever, but also realises he is not immortal, he is human. 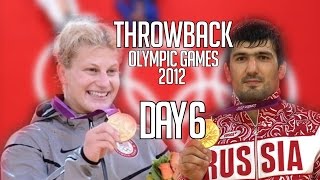