World number 10 Manuel Lombardo of Italy won all five of his contests by ippon as he charged to his first Grand Slam title. The 20-year-old outperformed former World Judo Masters winner Orkhan Safarov (AZE) in the final as the Italian scored with a ippon-seoi-nage and a modified kata-guruma respectively to win by two scores without reply.

In the first semi-final Pan American Championships bronze medallist Orlando Polanco (CUB) fell to Safarov by ippon as the Azeri overcome some issues with his judogi in the preliminaries to capture a place in the gold medal contest.

In the second semi-final Olympic silver medallist An Baul (KOR) was halted by Lombardo who saw off the former world champion with an o-soto-gari for ippon.

The first bronze medal was won by An on his second IJF outing this season as he conquered Zagreb Grand Prix winner Alberto Gaitero Martin (ESP) with a seoi-nage for a waza-ari score.

The second bronze medal went to Polanco who caught the eye for Cuba as he beat seasoned campaigner and Mongolia’s household name in four-time Grand Prix winner Ganbold Kherlen (MGL). Polanco, who was competing in his first senior event outside Pan America, threw with an o-uchi-gari for a waza-ari score and pressured his Mongolian rival who picked up his third shido and received his marching orders. 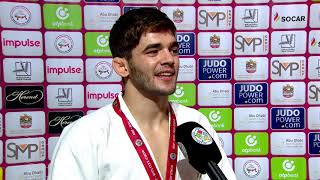 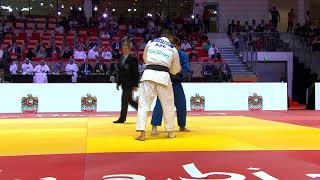 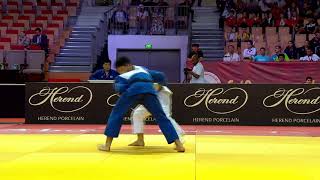