Barbara Matic from Split set Croatia on fire with her world title, the first ever for her country. The double Junior World Champion is the star in her country and sports woman of the year, but this is the absolute hero status for Matic after her victory over Japan’s Yoko Ono.

Matic had never won a World Championships medal but smelled that Ono was vulnerable. Ono almost got caught in the first second of the semi final against Sanne van Dijke and also this tine it was Matic to score first by wazari 40 seconds for the end but came into a hazardous situation on the ground when she escaped from a strangle in the dying seconds.

Ono is the number two of her country, but she is very strong and Chizuru Arai will represent her country U70kg in Tokyo. Ono though won the IJF Masters and was one of the big favourites to win. The Japanese have a reputation U70kg with double World Champions Masae Ueno and Chizuru Arai. Matic was able to hang on with the arms of Ono under the neck and under full pression and took that desired first world title.

Current European Champion Sanne Van Dijke took the bronze medal in Budapest but was disappointed as she felt she could have won that world title as well. Van Dijke started explosive in her semi final against Yoko Ono and scored a wazari, almost an ippon against Ono but let go her pace and got two penalties giving her a lot of pressure not to take a third penalty and gave Ono all chances to get back in the match. Ono scored in the last minute and the match went into golden score. Van Dijke became stronger but Ono was again lethal in the transition to the ground and defeated van Dijke with a hold down. In the bronze medal bout the Dutch who will go the Olympic Games. She defeated Miriam Butkereit with an oseikomi in a minute after she scored a wazari with a soto makikomi.

Michaela Polleres gave Austria the first World medal in eleven years. 40 year old Sabrina Filzmoser who even competed in Budapest was the last in 2020. Polleres won bronze against Megan Fletcher of Ireland who had an amazing day as well. Polleres beat Fletcher three times begore. After three minutes Michi Polleres changed direction with an attack and scored a wazari and Polleres made the transition to oseikomi and highlighted her career on her way to the Games in Tokyo. She had won European bronze but this precious medal had a huge value for her country.

Some of the favourites didn’t last long in this tournament. The 2019 finallists lost in their first match. 2019 World Champion Marie-Eve Gahie lost to Dutch woman Hilde Jager who lost to Matic. Also 2019 runner up Barbara Timo of Portugal lost to Fletcher in her second match. Brazil’s Maria Portela made it to the repechage after a loss against Ono but got beaten by the magnificent Fletcher. Exciting unexpected quarter finals with a surprising outcome and Croatia can look forward to the Olympic Games in about 50 days with Barbi Matic in the driver seat, 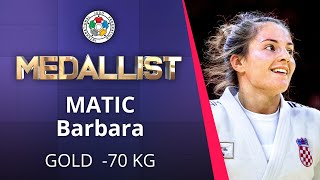 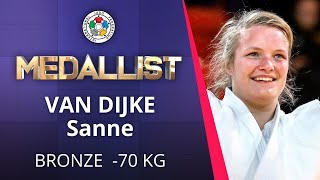 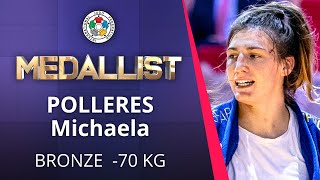